Creating very intricate relations with borders, this is a story of courage, sacrifice, and dedication to a country that runs in Khetarpal's blood. With the same aspirations, the young lad of their family made sure that he could prove it worthwhile.

The Khetarpals of Sargodha (now in Pakistan) always had a very close relation with borders. Be it the time when they had to migrate to India as refugees or dearly serve their homeland as soldiers, borders were never new to Khetarpals'. Even the three generations of the family dedicated their lives to border by either being a part of the Sikh Army during the British Raj, fighting in World War I against Turks, or as an engineering officer in the Indian Army. Borders remained an integral part of Khetarpals' legacy.

While these borders are simply battlegrounds where the fate of a country is decided, they are glorious for they bring the bravest and ferocious stories of all times.

An example of this started in 1950 when the Khetarpal family were graciously blessed with a beautiful baby boy who would one day make the entire nation proud. Upon naming him Arun Khetarpal, the entire family celebrated and welcomed the new heir to their legacy.

Little Arun exhibited his forefather's fraternity right from the beginning since he was an able sportsperson in school and excelled in both academic and athletic abilities. Soon after this, Arun even joined National Defence Academy and carried his remarkable performance until he got admitted to the Indian Military Academy.

Just at the age of 21, the young man was all set to begin his border journey.

As 1971 drew to a close, tensions between India and Pakistan heightened due to the Bangladesh Liberation War, which gave warning signs of probable military confrontations. Indian military forces were on high alert and in a state of preparedness as war clouds loomed over the country.

Following the academy training, Arun was commissioned as second lieutenant for the 17 Poona Horse. Organizing a bridgehead across the Basantar river in the Shakargarh sector was an important objective for this armoured regiment of the Indian Army. Many fierce tank battles raged between the Indian Army Brigade and Pakistani Army Brigade in December of that year.

In Jarpal, Arun Khetarpal, the second lieutenant of the regiment, saw a couple of enemy tanks launch a preemptive attack. Their retaliation was fierce and both sides suffered injuries. Arun and two other military personnel decided to conduct successive assaults deep into the enemy's territory using their tanks.

When the battle was at its height, Arun alone stood like a rock between defeat and victory as the other two tanks broke down. His daring run toward the enemy tanks was a headlong dash.

There followed a fierce battle in which Arun personally destroyed four enemy tanks. After Arun's tank caught fire, he was advised to abandon it, but this would have opened the way for the enemy to advance on him. Thus, he went on to gallantly destroy another tank before being fatally wounded. The young and lone fighter sacrificed himself on the border as he fought until the bitter end like a furious lion.

With his sacrifice, the Indian army gained a crucial advantage as the battle continued for further days and led to India's victory in the Battle of Basatantra.

As a result of his unmatched courage, his persevering resolves, and his supreme sacrifice in the face of the enemy, Second Lieutenant Arun Khetarpal was posthumously awarded the Param Vir Chakra. The last words his parents spoke to him before he left for the war were, "Your grandfather was a brave soldier, and so is your father. Go fight like a lion till the end”. Although at the cost of his life, it is undeniable that the young and ferocious Khetarpal left no stone unturned when it came to carrying on the legacy of his forefathers.

It's a grand salute to you, sir! 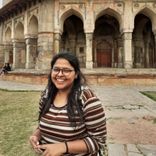 Ishita Gupta Author
While I write life stories of others, make sure to get me the perfect 30 words that define me. Otherwise, I will mess it up with my own silly jokes.