Kingmakers on the Run

A crown that lay on the temples of an ageing man became the hope of many against the firangi regime. Emperors are made emperors by blood but this time, people chose their leader and led the fight themselves.

We were on a run, not from the problem but towards it. We were playing with fire; the fire that had been burning our lands for years now. It has to be put out soon. We were Sipahis. Not of the Raj anymore, but of our motherland.

The time had come and the fight had begun.

Standing up against the firangis was not an easy task. It was like going into the mouth of death. There was no going back now for we did not leave Meerut only to wait and do nothing. This was a war of freedom from the anarchy of destiny that had made us ghulams.

“Down with the Raj”, a roaring chant got me back to my senses.

“We don’t want to die for our motherland, we have to live and fight on. The wrath, courage and tremor in your hearts will not win us this war, we need a strategy. Without a plan, our dreams are dust”, said our leader. I nodded in agreement and this is why we are on a march to Dilli to meet our Badshah Sahib. I had never seen him but everyone said that he and his forefathers have looked after us for centuries now. Hindoo and Musalmans were united and only our Badshah will lead us now.

A horse neighed in the distance. The rider swiftly got down and ran towards us. It was Hari, our messenger. While we stood on the borders of Dilli, he and his team brought us reports that would help us in deciding our action.

“Calcutta Darwaza is locked and heavily guarded with canons. News about our move from Meerut reached the city before us. They are ready”. He took a brief pause and shouted, “so are we”. Our voice raised in unison. This was a moment of joy, maybe a sign of our victory.

We never planned to enter the city through Calcutta Darwaza. Our focus was the Rajghat Darwaza. Quickly, we got into commotion and took up our lines. We marched- towards Dilli and towards our freedom.

“They are storming the gates Sarkar '', the soldier was shaking. The old Badshah took a deep sigh. He was a frail man living amidst enemies. He was a captive in his own house, in his own country. An emperor he was but the empire was not his.

Najib, the soldier in command of the Rajghat Darwaza was narrating the scene outside his fort. “They came out of nowhere Sarkar and kept demanding for the doors to be opened but how could we do this. They are the bahgis. Soldiers who defy their superiors are deserters with no morals. They cannot be trusted. ”

“How did a handful of Baghi Sawars become a threat to the city Najib”, quipped Emperor Bahadur Shah Zafar.

“Sarkar, many were taking their ritual bath in the Jamnah when they reached Rajghat Darwaza. Initially, these people were also wary of the sipahis working for the Firangi and got into an argument with them. No one prefers the English in the city. The lesser their number, the better. But things changed when the soldiers told them about their cause. The city people joined them in their demand. When we ordered them to recede, they started pelting stones at us. Sarkar, we could not launch an attack on them for they were not enemies. Before we could figure out a way to control them, they flung open the door and it was…”

“Sarkar, your subjects have spoken. You know their will”. A voice came from the other corner of the room. It was Begum Zeenat Mahal, the wife of the Badshah.

“You are the emperor of the people. They are not just your subjects, they are your children. For hundreds of years, your family has looked after them. These British claim power from the permit your family, your blood, your crown gave them. This is not their country Sarkar, it is yours. You wear his crown. Every Hindustani listens to you. All those who stand outside our doors today have come to you for help and they have every right to do so. We cannot turn our back towards them now. What is left for us to lose? These firangis run this land like they are the kings. Even if we lose, it’s better to be on the right side”.

The emperor could not deny what queen Zeenat said. Each word of hers was true.

“Open the gates. My subjects want to see me. Tell them, their Badshah is here”.

We stood right below the Jharokha waiting for Badshah Sahib. We had only heard stories about him. With the help of the city people - our brethren - we managed to get into the fort. Now, our future depended on the will of a single man.

There he was, our Badshah, the man under whose banner we would fight this war of freedom. I knew he was old but didn’t know he would look like an ancient figure - weak and sick.

“My subjects, I am here. Three centuries ago, Emperor Akbar began this practice of Jharokha Darshan. I am not here for you to see me or hold me in awe, I am here to bless you in this noble cause.” In that sunlight, Bahadur Shah Zafar looked regal. He was no warrior, he was a poet. A poet he was but still a man of conviction.

At this moment, it won’t be wrong to say that fear did not creep into his thoughts, it did. Yet, a faint voice told him that apprehension should only be reserved for the ones who try to trick you, not the ones who ask for your help.

He was at the dawn of his life and for once, the dream of absolute freedom was enough to invigorate long lost hopes buried in his bones.

“You have my blessings”. The crowd cheered.

This was history made and history undone. People choose their emperor, they did his coronation. The might of the British East Company was going to get a great shock as the soldiers undertook Red Fort in their control and the city of Dilli went into a siege.

Palak Jain Author
Right from the dark academia tag on Tumblr to Post-Colonial perspectives, I am a History Honors student at Delhi University, who is interested in everything about the subject. When I am not reading or watching animated movies, I like to spend my time (unsuccessfully) learning languages. 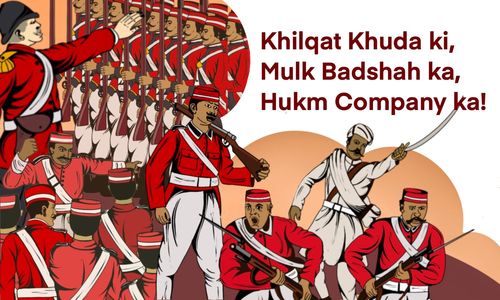